In October 2017, VRX Silica announced the acquisition of the Arrowsmith Silica Sand Project, located 270 kilometres north of Perth in WA. The project sits across five exploration licences, two mining leases and five miscellaneous leases totalling approximately 377 km2 adjacent to the Brand Highway and the rail connection to Geraldton Port, which is suitable for bulk shipping.

Silica sand is the primary component of all types of standard and specialty glass and is also used for metal casting (foundries), metal production, chemical production, paint and coatings, ceramics, filtration and water production, and oil and gas recovery.

Work to date at the Arrowsmith Project has identified a Mineral Resource in excess of 847mt and Ore Reserves of 241.9mt of silica sand suitable for use in both glassmaking and foundry work, supplies of which are in increasing demand as a result of booming technology and construction sectors in the Asia-Pacific region.

Two areas within the Arrowsmith Project have had preliminary investigations: 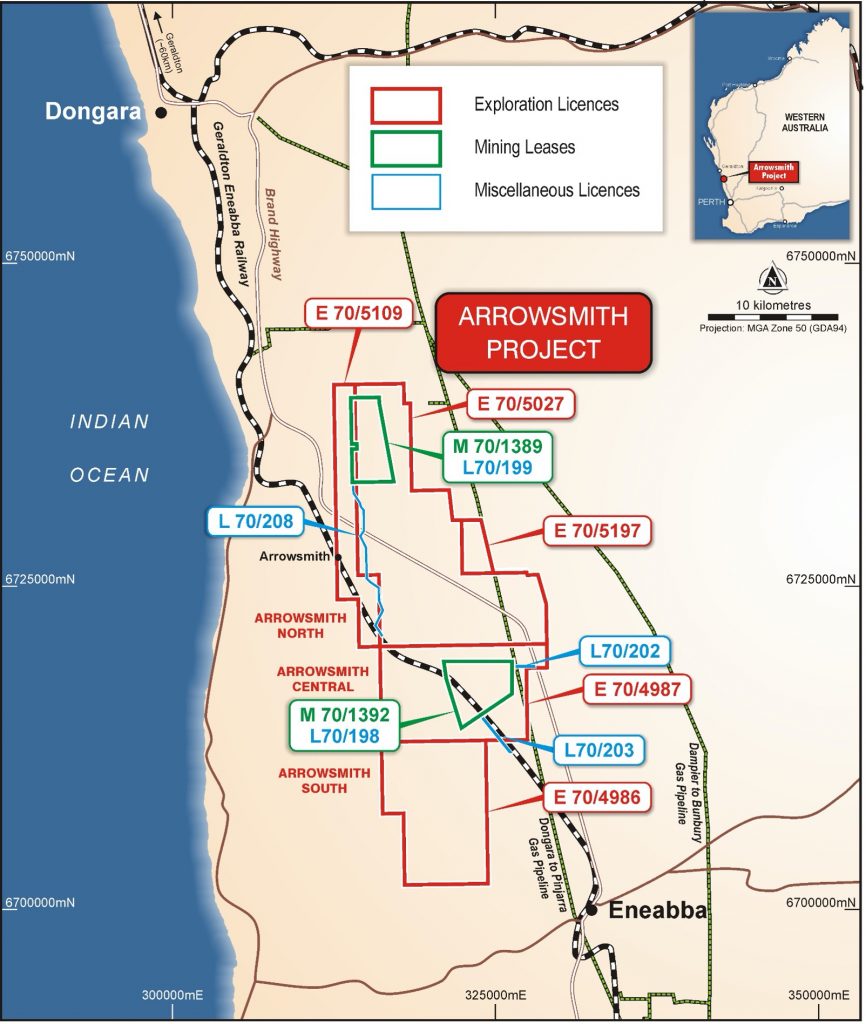 During March 2019 VRX Silica completed an aircore drill program at the Arrowsmith North Silica Sand Project over the area previously tested only by shallow hand auger drilling.  The analytical results were used to update the Mineral Resource Estimate for the Arrowsmith North Project. 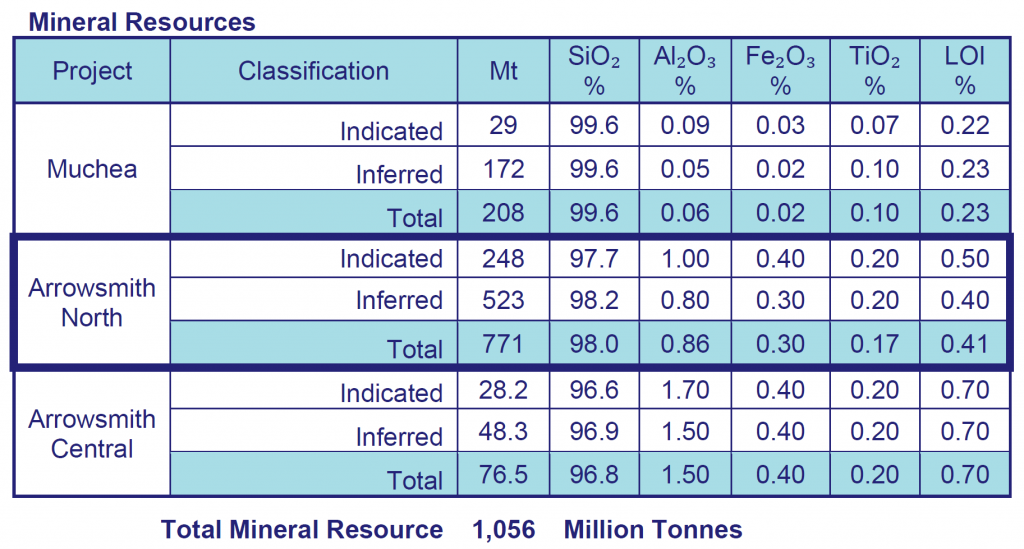 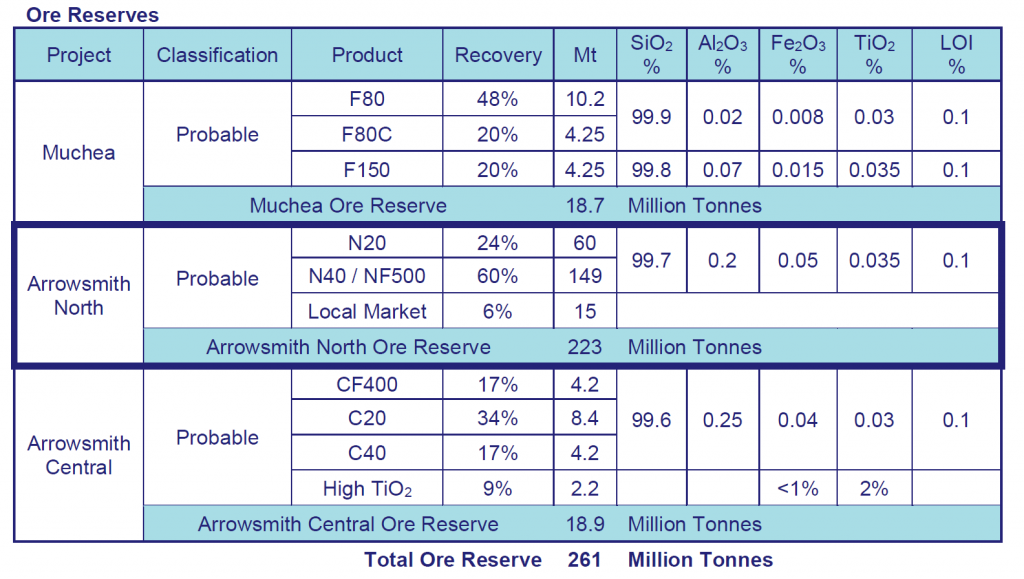 The Arrowsmith North Resource Area focuses on a prominent broad dune structure and avoids existing infrastructure and potential conservation areas. The potential volume is estimated from the base of drilling to the top of the dune and assumes that between 70% and 100% of the dune is silica sand. The estimate uses an in-situ bulk density of 1.6t/m3 to calculate the tonnage. The initial target grade of +95% SiO2 was considered conservative as all samples, except two, taken from the area exceeded this value and processing demonstrated the in situ sand can be beneficiated to a saleable product.

All Mineral Resources are reported in accordance with the JORC Code 2012.

Significantly the Mineral Resource includes an unpredicted 313 million tonnes of white sand at 98.7% silica. A high-grade final product can be produced from the higher-grade feed stock which is in demand for the glassmaking, foundry and ceramics industries.

This Mineral Resource estimation allowed the Company to finalise estimates of Ore Reserves to support the Company’s BFS.

The Indicated Mineral Resource is predominately within the Mining Lease application area and the majority is anticipated to convert to Probable Reserves and hence an extremely long-life mining project.

During the March quarter 2021 the Company completed a grade control drilling program of 1,459 metres at Arrowsmith North on the site where mining will commence. 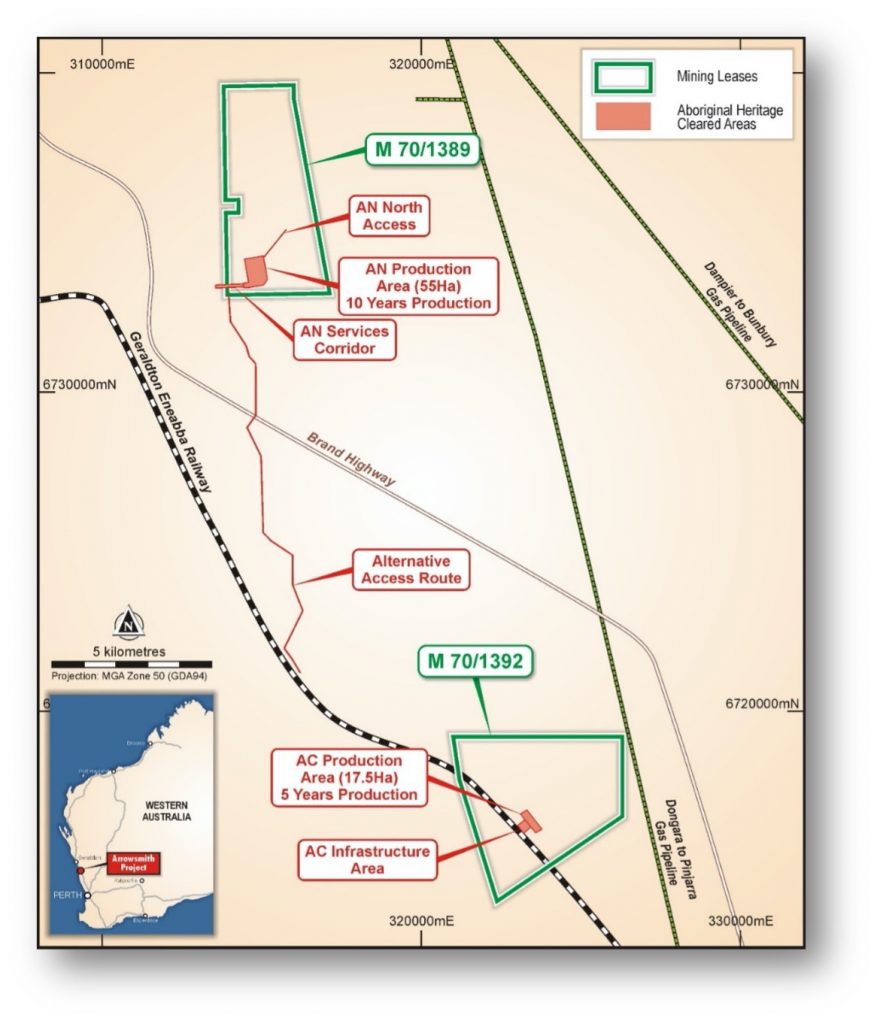 The Arrowsmith Project area has a mining depth limitation to be above the water table, which is 10 metres below the drilling. The MRE has been estimated to a nominal depth well above the water table and the top half metre of topsoil has been discounted in the MRE as it will be used for rehabilitation.

Process circuit design and engineering has been completed, allowing for processing plant capital cost to be estimated at $18m per plant and total capex (including plant feeder and water supply per plant) estimated at $25m per plant.

From the start of the Arrowsmith Silica Sand Project VRX has proactively consulted with the Southern Yamatji Working Group and YMAC and built a strong and supportive relationship. Together the parties have conducted a number of comprehensive archaeological and ethnographic Heritage Surveys in the project areas during which no isolated artifacts were found and no onerous recommendations made.

Settlement included the conclusive registration of the Yamatji Nation Indigenous Land Use Agreement (ILUA). This means that VRX’s Mining Lease and Miscellaneous Licence applications for its Arrowsmith Projects will now be dealt with under the terms of the ILUA. The ILUA now supersedes the negotiations that were underway between VRX, YMAC and the Southern Yamatji Working Group over the terms of a native title project agreement at the Arrowsmith Projects.

The Mineral Resource announcement for Arrowsmith North, including JORC Table 1 information, can be found here.

As announced on 17 September 2019, a Maiden Probable Ore Reserve was declared for the Arrowsmith Central Silica Sand Project of 18.9Mt. 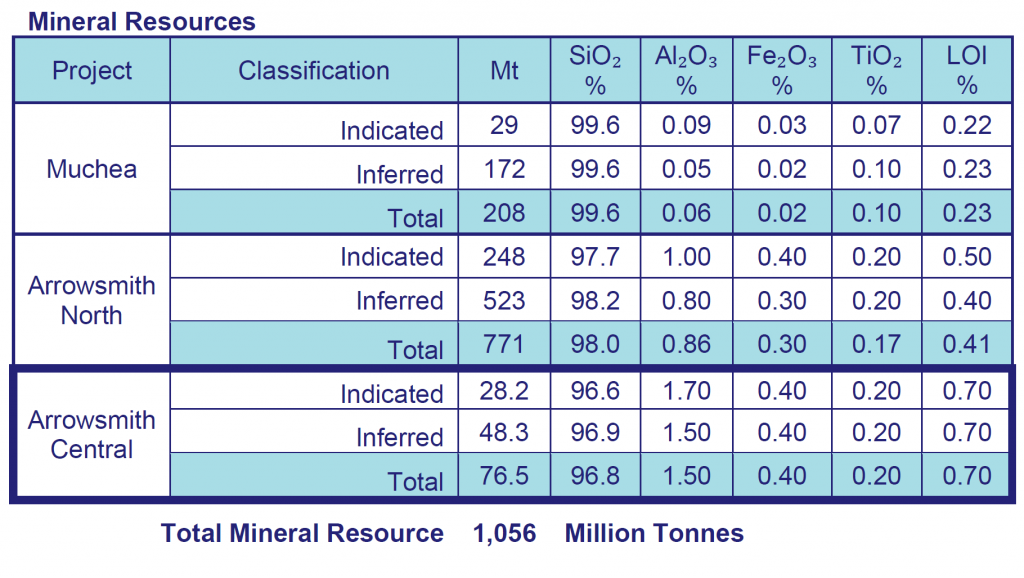 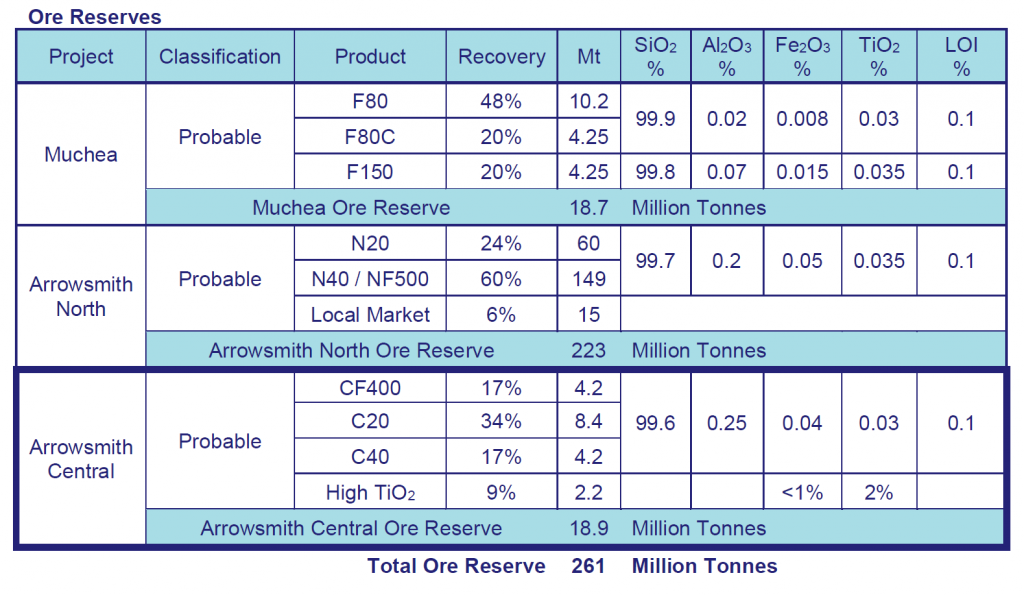 The Mineral Resource announcement for Arrowsmith Central, including JORC Table 1 information, can be found here.

The Arrowsmith South Exploration Target focuses on the southern end of a topographical high that is noted as containing an intercalation of limestone and dune sands and avoids existing infrastructure and potential conservation areas. The potential volume is estimated from the 45mRL to the top of the dune and assumes that between 50% and 100% of the dune is silica sand. The estimate uses an in-situ bulk density of 1.5t/m3 to calculate the tonnage. The target grade of +95% SiO2 is considered conservative as assays from all samples taken from the area exceed this value and processing is expected to increase this grade.

At Arrowsmith North and Arrowsmith Central the identified resources have been Aboriginal Heritage cleared with no impediments to mining and the plant location site. The Company has also obtained the last clearance required for a water bore to establish a permanent water source.